October 2019 - It is with sadness we record the passing away of Jean Stewart. Tom passed away in July 2015.

A COUPLE from Ross-shire who have known each other all their lives celebrated their 65th wedding anniversary this week, 7th July 2015, surrounded by family and friends.

Tom and Jean Stewart grew up in Culbokie and went to school together in the village and later at Dingwall Academy. 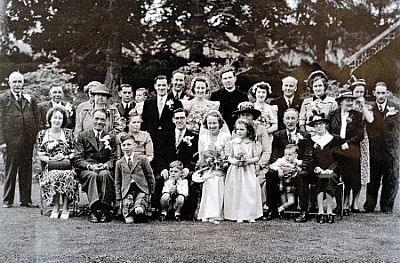 Note on place names: Cuidrach is now Glentyan where Murdo and Mary Bethune lived until 1995. Woodside has now been enveloped by the Ferindonald housing development.

Back row from left:-

The 4 children in front are unknown to me [Angus Bethune], but aren’t Woodside grandchildren, as Drew (the oldest) was only born in 1948. The first child is Malcolm Rankine and the third girl is Hazel Rankine.

There is a possibility that the little boy in front of Andrew Dingwall on the right is Fraser Brown.

We are indebted to Angus Bethune for the above identities. His parents, Murdo and Mary Bethune were married in Ealing on 8th July 1950 and whilst a number of Culbokie folk weren’t able to attend the wedding, Tom and Jean were there, as was Granny Dingwall from Woodside. The reference to the Rankines is courtesy of Jane Mackenzie who is still in contact with Hazel Rankine.

Around 130 guests attended their wedding on June 29, 1950 in the Free Church, Strathpeffer, which was followed by a reception at the Pavilion Hotel.

Mr Stewart, who was teaching at Douglas Water School, Lanark at the time of the marriage, went on to be headmaster at Inver Primary School near Tain from 1953. Mrs Stewart, whose maiden name was Dingwall, taught the infant class during that time.

The couple moved to live in Muir of Ord in the early 1970s, where Mr Stewart was headmaster of Tarradale Primary School. His wife worked alongside him again in administration and as a classroom assistant. Their daughter, Alison Greenhalgh, also taught at Tarradale for a time.

Mrs and Mrs Stewart lived in Muir of Ord for more than 40 years before moving to Southside Nursing Home in Inverness two years ago.

The couple have four children — Alison, Ian who is a teacher at Inverness Royal Academy, James a pharmacist in Huntly and Campbell, a Highland Council manager for the Caithness and Sutherland area.

They also have seven grandchildren.

Mr and Mrs Stewart celebrated their anniversary on Monday with a small gathering of family members and former neighbours from Muir of Ord. Report and photograph courtesy of the Ross-shire Journal 5th July 2015.

Mrs.Stewart still has relatives living in the Village. Jean is the oldest daughter of Andrew and Margaret Dingwall, Woodside, and thus Don’s eldest sister.  Tommy Brown’s mother is another sister of Jean’s. Tom often related stories of attending the Sunday School classes conducted by the Misses Keay, Findon Cottage. 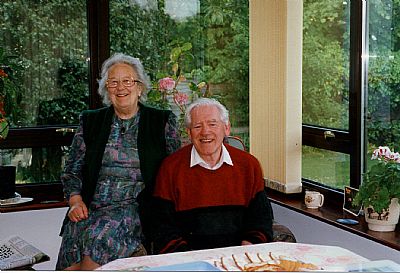 Tom and Jean on the occasion of Tom's retirement, after many years, as the Chairman of the Dingwall & District Beekeepers' Association in March 2006. Sadly Tom passed away in July 2015.