The first OS mapping in 1871 records extensive conifer coverage around Culbokie but by the end of the century much of it had been cleared for grazing.  Difficulties with meeting wartime demands for timber led to the establishment of the Forestry Commission in 1919.  The first acquisition by the Commission in the area was for the Findon unit (one of four on the Black Isle) in 1926 and over the next 20 years this grew to over 1300 acres.

The initial Findon plantings between 1927 and 1930 were in Bogbuie Wood, followed by Culbokie Wood and Culbo Wood.  The main species was Scots pine, suited to the dry conditions.  Local records highlight the ongoing rabbit problem.  Four forest nurseries on the Black Isle provided seedlings for much of the northern area.  The Findon nursery at South Glascairn was the first to be established in 1928; forestry housing was also built at this location.  In these initial years forestry was a major employer.  Increasing mechanisation and alternative sources such as Nigg led to much reduced numbers in recent years.  A major storm in February 1989 caused extensive damage to the forestry across the Black Isle. Predominantly pines were affected, many destroyed at half their eighty-year life expectancy. 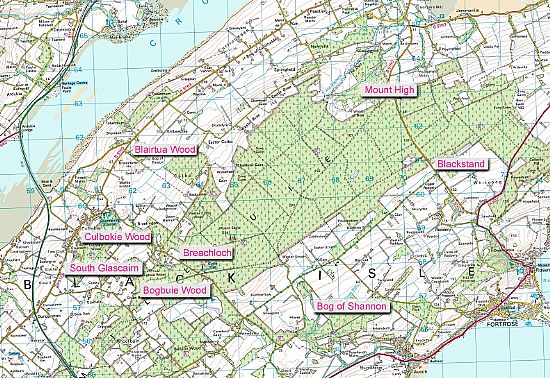