No “Day Returns” from Culbokie

To read the full article from which this summary is taken, click here.

A little known fact of the area is that a railway was planned between Cromarty and Dingwall that would have resulted in a station being provided for Culbokie. The proposed location of the station would have been that well-known spot frequented by many dog-walkers who exit and enter the Oakwood from the lane leading down to Findon Mains. (See photograph below.)

The passing of the Light Railway Act of 1896 by Parliament opened up a significant number of proposals for railway schemes throughout the country due to the reduced standards required for materials, design and operation which meant that the cost per mile of construction and operation were significantly reduced.

Planning for the Cromarty to Dingwall Light Railway commenced in 1896 but powers for the construction were only granted in Parliament by Provisional Order in August 1902. Major discussions took place in the early days as to where the line would join the Highland Railway main line. The original intention was to go to Dingwall via a bridge from Alcaig over the River Conon, but this was deemed to be an expensive luxury and the line was designed to run through to Conon. There had been a lot of support for the bridge and a report in the Rossshire Journal of 13th March 1896 stated that Ex-Baillie Nicol could assure the meeting that so far as he could see there would be the slightest difficulty of crossing the Alcaig ferry and climbing up the hill to within measurable distance of Culbokie. Instead of the line doing harm to Culbokie, it would do it good. Dingwall was the capital of Ross-shire but he had always looked upon Culbokie as The Capital of the Black Isle and he had no doubt, from its healthy situation, Culbokie was bound to grow and develop.

The Ross-shire Journal report of 21st February 1896 can be accessed here which demonstrates the high enthusiasm the locals had for the scheme.

The Ross-shire report of 21st August 1896 can be accessed here.

Construction commenced in Cromarty with earthworks, landscaping, forestry, fencing and bridges preceding the laying of track. Culbokie station was to be one of four each provided with a short siding  and loading bank, passenger facility and Station Agent’s house, the others being at Alcaig, Drumcudden and Newhall.

The start of World War 1 brought construction to a halt and all materials, both laid and in stock, were removed and sent away to support the war effort.   Not only would this hamper the opportunity to progress the line but the demands made on the local population to help build local military installations such as those on the Sutors meant that the Engineers were hard pushed to attract suitable remaining manpower.

By the end of the War the situation had changed dramatically both in terms of finance required due to rising costs and the availability of materials so that construction failed to recommence. Also, by this time roads had been improved resulting in better bus services and more delivery lorries, (some possibly war-surplus), which were much more flexible in making deliveries. By 1926  it was recognised that there was no future for the Line and the Company was wound up and a final dividend paid to subscribers. 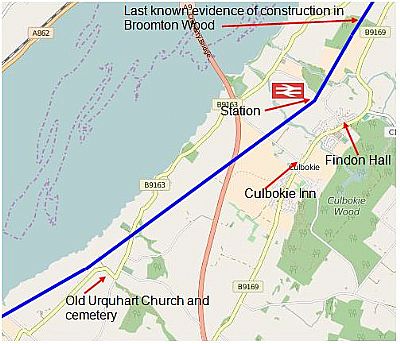