Càrn Mòr Dùn, Culbokie (see plan in Gallery below) is probably the best surviving example of an “Iron Age" Dun (Gaelic for castle, pronounced “Doon” and about 2000 years old) on the Black Isle. It lies on the end of a low ridge surrounded by a forestry plantation and the almost circular stone wall measures 30 metres in diameter overall. The denuded entrance lies on the south side and the interior which appears to be five sided measures about 17 metres in diameter. The height of the surviving spread wall is up to half a metre high internally. One or two internal facing stones are visible, by the entrance and on the east side. Inside the wall on the north side there appears to be the remains of a small secondary enclosure and near to the centre is an ancient yew tree. Another in-filled excavation trench is visible over the wall on the north-east side. The outer defences consist of a pronounced ditch and a rampart, both double, on the northern, more accessible side. Elsewhere the ditch and outer bank is less evident where the land slopes naturally away.

The Dun would probably been have the fairly secure home of a local chief and his extended family, also providing shelter and security for domestic animals from rustlers and wild animals. The land would have been farmed and barley grown, as seen on the artist's reconstruction.

This link will take you to the Highland Historic Environment record (HER) for the dun. In the Report section the final thumbnail (a blue front cover) is a survey of other sites on Forestry Commission land. The Carn Mor site is on page 20.

The first series of photographs, below, were taken on a guided tour conducted by Duncan Ross, 21st November 2015. Click on an image to start the slide show and progress with clicking on the right or left the picture.

The second set of photographs and plan form part of a survey carried out by Mary Peteranna, Lynn Fraser and Cathy MacIver for the Forestry Commission.

The third set of photographs are from the guided tour conducted by Duncan Ross and as you can see our publicity certainly attracted a sizeable turnout all the more surprising given the inclement weather. 20th February 2016.

A fourth set of photos was taken on 10th November 2017 shortly after the Forestry Commision had been at work tidying the site. 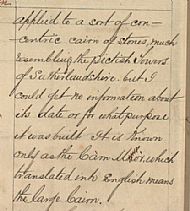 Carn Mor OS name book entry 28-31-48 (top)
Carn Mor OS1/28/31/48 one of two entries - see OS1/28/31/84
Applied to a sort of concentric cairn of stones, much resembling the pictish towers of Sutherlandshire but I could get no information about its date or for what purpose it was built. It is known only as the Carn Mor which translated into English means the large cairn.
[Added at a later stage]
This has evidently been a fort as it is similar in many aspects, only larger, to a chain of the same kind of entrenchments which may be found extending from Cromarty by Beauly through Strathglass, it is of a circular embankment or parapet being comprised of stone and earth, and surrounded by a deep trench. Human bones found in the interior of entrenchment A.D. 1859

Carn Mor OS name book entry 28-31-84 (top)
Carn Mor OS1/28/31/84 one of two entries - see OS1/28/31/48
This name applies to an old monument much in the form of a Danish Fort commonly asserted to be the remains of a castle but what name it bore by whom erected or when demolished there is neither history or tradition to state. Mr Forbes who is an aged man asserts that he remembers part of the walls standing which has since been removed for farm purposes. There were pieces of warlike (?) accoutrements and bits of human remains found in it but at what date I could not ascertain. It is on the property of Arthur Forbes Esq Culloden House. 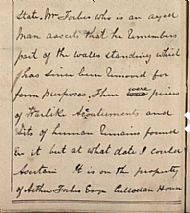 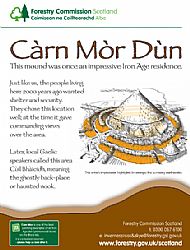 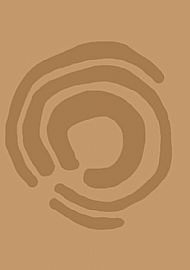 Attempting to show the depth of the ditch. 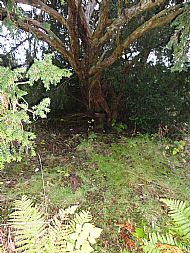 Yew tree at centre of Dun

The following material was produced by Mary Peteranna, Lynn Fraser and Cathy MacIver on behalf of the Forestry Commission who hold the copyright.

One way to demonstrate the steepness of the slope!

Our thanks to Duncan Ross for the plan and briefing David Simon who produced the artist's reconstruction. Apparently there might be a bear hidden somewhere!