Good Templary, an international temperance movement founded in New York in 1852 and brought to Scotland in 1869, may not be familiar to many.  Yet in the early decades of the twentieth century it played a key role in the social and practical life of Culbokie and was instrumental in the building of the first Findon Hall.  The three key missions of the Good Templary Movement were universal abstinence; international prohibition; and world-wide fraternity and goodwill.  From its start one of its most important features was the admission of women on equal terms to men.

The Movement was organised through local Lodges; by 1894 ten Lodges with a combined membership of 652 had been established in Ross and Cromarty.  The first Lodge in Culbokie was the ‘Star of Findon’ Lodge, established in February 1898 with an initial enrolment at the first meeting of 30 members.  In 1905 the Lodge changed its name to ‘Culbokie Undaunted’ and remained active until the early forties.  Weekly Friday meetings were held, initially in the School and later in Findon Hall.  Lodges had a large number of office bearers, rotating on a frequent basis.  Many local families feature in the lists of office bearers over the years: Dingwalls, Bethunes, Fowlers, Frasers, Jacks, Macdougalls, Maccullochs, Keays.

The Ross-shire Journal and the North Star provide fascinating accounts of the activities of the local Good Templars over the initial years.  Social activities appear to have been to the fore with accounts of concerts including songs and recitations,  bagpipe and melodeon selections – and Indian club exercises.  Refreshments (soft!) were always on the agenda.  Annual picnics were a long-standing event, starting with a joint outing to Black Rock – by boat – with Kirkmichael Lodge in 1898 and continuing to the thirties.  The full account includes some excellent photographs of these later outings contributed by Elspeth Weir whose parents were members.

Soon after the Star of Findon Lodge was established plans were made to provide a public hall for the benefit of the community.  A grand two-day fundraising Bazaar was held in 1899 and fundraising efforts continued until the opening of the original Findon Hall in April 1904.  Indeed fundraising continued with a second Grand Bazaar in July 1907 designed to clear the outstanding debt.

The story of the present Findon Hall can be found here. 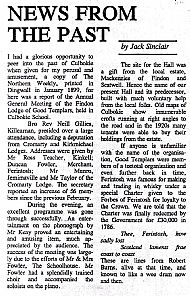 Jack Sinclair {former chairman of FCC} contribution to The Noticeboard