Records show the existence of the Findon quarry and pier in the 1760s with references to the exporting of stone and the importing of various commodities such as coal and timber. The quarried stone was transported throughout Scotland and a reference exists of samples being sent to London in 1853.

They were part of a number of such arrangements around the shores of the Cromarty and Beauly Firths.

There is little evidence today of the pier and jetty which were absorbed into the construction of the A9 Cromarty Bridge causeway which was the last use of the quarry to provide stone for the southern causeway. The history of the construction can be accessed here. The flooded quarry has been hidden by the sewerage treatment works and a belt of trees. The photograph in the Gallery below attempts to show the position of the pier/jetty. A film showing the building of the Cromarty Bridge can be found here. It offers tantalising glimpses of the southern end where the old jetty would have been.

Local historian Dr. Jim Mackay has produced a series of histories relating to the eastern end of the Black Isle and his story of the quarries at Cullicuden touched on the facilities at Findon. His page can be found here. 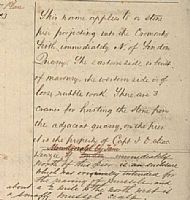 Findon Pier
Findon Pier OS1/28/31/17
This name applies to a stone pier projecting into the Cromarty Firth immediately N. of Findon Quarry. The eastern side is built of masonry, the western side is of loose rubble work. There are 3 cranes for hoisting the stone from the adjacent quarry, on the pier. It is the property of Cpt. J. D. MacKenzie fo Findon (scored out) Mountgerald by Tain
Immediately north of this pier is an enclosure which was originally intended for the rearing of mussels and about a 1/2 mile to the north west is a small mussel scalp.

Findon Quarry
Findon Quarry OS1/28/31/13
This name applies to a large sandstone quarry, situate about 60 chains N W of Culbokie, upon the property of Capt J. D. MacKenzie of Findon (scored out) Mountgerald by Tain

The trees to the immediate left of the bridge are as the result of the infill and planting between the causeway and the old pier/jetty.