A communion token is a metal token issued to members of Reformed churches in order to provide them entrance to the Lord's Supper. There were many types issued in Scotland in the 18th and 19th centuries, but they were largely superseded by communion cards.

It was John Calvin in the late 16th century who saw the usefulness of using lead tokens as proof that people had been properly instructed prior to coming to the Lord's Table.

The French Reformed Church was the first to put Calvin's suggestion into practice and it later spread to Scotland probably by John Knox and others who had observed the practice on their visits to the Continent. As well as indicating the communicants' right to partake in the Lord's Supper it is likely that the tokens also served to safeguard the Reformed churches from spies at a time when church meetings were illegal. The Scots who came in large numbers to Ireland in the 17th century brought with them not only their own ministers but the use of tokens as a means of regulating communion.
However, most were issued in Scotland, where over 5,000 types have been recorded.

The earliest tokens were made of lead but others were of tin, brass or white metal usually by a local blacksmith or silversmith. The tokens generally either bear the initials of the church or of the minister or some other unique feature. Good examples of communion tokens from Presbyterian churches in Northern Ireland and in the Republic of Ireland, Scotland and Australia have survived.

Many tokens have verses on them, such as "This do in remembrance of me" (1 Corinthians 11:24) or "Let a man examine himself" (1 Corinthians 11:28). They were made of lead or another base metal, and came in a variety of shapes: round, oval, square or oblong. Earlier tokens had the ministers' initials on them, and many had the name of the church. When the Free Church of Scotland was formed in 1843, many tokens were issued with this year – these were used as stock tokens in many congregations. The burning bush is found on many tokens, as are objects such as a Bible, communion cup or communion table, or else Christian symbols such as the fish, lamb or cross.

The Glens of Antrim Historical Society notes that "from the end of the nineteenth century metal tokens were gradually replaced by communion cards and rules regarding admission to the Lord’s Table were eased, allowing visitors who were members of other denominations, on profession of their faith to communicate."

Compiled from material contributed by Presbyterian Historical Society and Wikipedia. 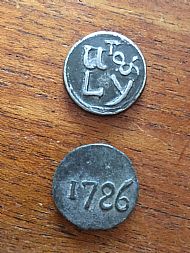 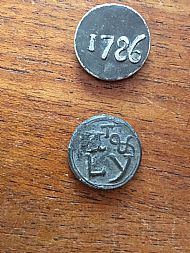 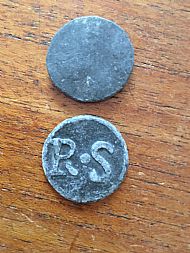