Connecticut River Shipbuilding has been released from Arcadia/ The History Press. 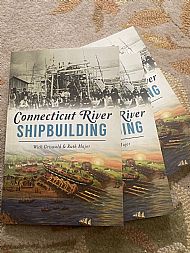 Photographs of the book signing in the Gallery.

The book features John, Walter and Meriah Urquhart, all children of immigrant John from Findon, above Cromarty Firth, who graduated from Kings and Marischal  Colleges prior to leaving Scotland in the late 1780s. He became a Headmaster, and ordained Episcopal rector at Trinity Church in New York City and was sent up to the Highlands of New York to minister to St. Ann’s and St. John’s. Rev. John married a Dutch/Irish girl named Susannah Van Vorst and had 6 children between 1800-1813. Both of the Urquhart’s sons and their youngest daughter became part of a large maritime family in New York and Essex, CT. All are included in my half of the book. Ancestral shipmasters and their wharves and ships - images from our book are shown in the Gallery.

One of the images is of a square that Ruth has created for the lockdown quilt organised by the Culbokie Community Trust. 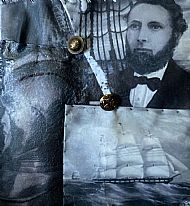 The details of the square are as follows:

Medium: photo transfers of my paintings, buttons on white cotton.

Self Portrait in Armour

The buttons hold the centuries together.

“Captain William Urquhart rescued his young cousin, Lewie Post, mid ocean though the boy drifted a mile from the ship. We would not be here to tell their story if it were not for Captain Urquhart’s quick thinking and close relationship with Lewie, my 2nd great Grandfather, whose mother was Meriah Urquhart, Rev John’s youngest child. I show myself in armour because I have felt threatened many times in my life and imagined myself in armor. Now in these devastating times of the Worldwide Covid 19 Pandemic, I feel threatened again. “

The Gallery at the foot of the page contains enlarged versions of the paintings.

All paintings are by Ruth Major, ruthmajor.com

(1.) “Devil’s Wharf and Beacon, Deep River, Connecticut,1857” Oil Painting from a photo taken by the artist and an old map. Painting by Ruth Major.

The wharf beacon was installed by the government at the request of Captain Joseph Post who was paid a yearly fee for maintaining and lighting the beacon. Each night he would row up river from the Post homestead and light the single, fixed, prism lens in the beacon to alert vessel captains and fishermen to the presence of his wharf. 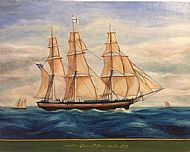 2.) “Bound for Liverpool, Cotton Packet Ship Hector, 1834,” after a watercolor by Frederick Roux belonging to Geoffrey Paul, of Essex, Connecticut.

When Captain Joseph Post learned of his first wife’s death in Essex, he turned his ship around and headed back to Liverpool. Joseph handed Hector over to his chief mate and younger brother, Captain David Post, married Mary Prichard in Liverpool and returned to Essex with his new bride.

On the day of Orphan’s launch, the ship would not “go down the ways,” despite several attempts to coerce her. All the oxen in town were rounded up and brought down to the shipyard in an effort to get her started. By 8:00 PM, with the help of the ox trains, and in the midst of a sudden rain storm, Orphan was launched into the North Cove to shouts of joy and church bells pealing. 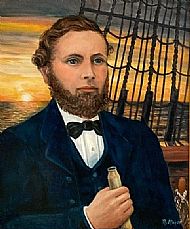 Captain William Urquhart was 23 in 1861 and went to sea as shipmaster with Essex mates and four ship’s boys, including his 15 year old cousin, Lewie Post. In this portrait, Captain Urquhart is contemplating his return voyage as the American Civil War was underway and rumors of Confederate Raiders taking over merchant ships only added to the challenges he faced at sea.

Built in New York by Westervelt & Mackay in 1846 for the shipping line. About 900 Tons 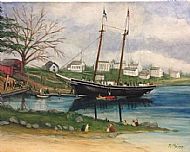 James A. Phelps was used in the lumber and Brownstone coastal trade for several years. In 1881, after a long career at sea, including four years in the Civil War, Captain Rockwell died on the schooner in Chesapeake Bay. His 5th wife Margaret was with him. John and Margaret are buried at the National Cemetery in Arlington, VA. 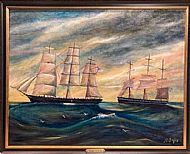 The Loch Earn collided with the French Steamship Ville Du Havre just after midnight, hitting her broadside, leaving a 10-20’ wide gash on the midsection of the steamship and causing the vessel to sink within minutes. 226 men, women and children drowned or were killed when the Main and Mizzen masts fell onto the lifeboats.

Guided by a dream, Captain Urquhart of the Trimountain arrived on the scene at dawn and spent the day searching for survivors. The 87 passengers and crew who survived were taken aboard the Trimountain and brought to Cardiff, Wales to be reunited with their families or await further news of the Loch Earn.

Contribution to the lockdown quilt.