Of all the housing developments in Culbokie I consider this to be the most controversial with which the Ferintosh Community Council (FCC) had to deal. I write this from the perspective of someone who served on the FCC since its inception and stood down as Chairman in 2011 having missed out on the discussions leading to the future development at Glashcairn Meadows and having no significant memories of the other developments.

Unfortunately my memories are not the most reliable but reference to some of the photographs shared on this site plus newspaper articles saved from the time, and shown in the gallery below, that show how seriously it effected me – has helped it improve and refresh those memories.

The relevant portion of the Ross and Cromarty East Local Plan Consultative document (shown below) published June 2002 gives an indication of the timescale involved with the newspaper articles of 1997 indicating the start of the process and 5 years later no building has started as indicated by their absence from the Plan. However, confusingly, I have photographs dated 1997 that appear to show that Zone 2 building was being planned. For comparison purposes the adopted Plan of 2007 is shown with some of the properties in place.

As building work commenced it became obvious that the developer, who was no longer the Mr Ross referred to in the newspaper articles, had ideas of developing Zone 1 more extensively than the original plan and so we were faced with requests for extra houses being inserted with garden spaces being adjusted to accommodate them. The street plan (below) shows the additional houses (to the original plan) as 11a and 11b, number 1 Mount Eagle Court (the clue being how far back it is sited and the 2 houses with the shared access to the 'south' of 7, 9 and 11. All this led to a lot of work and consultation with the planners and caused us to wonder what we were going to experience when Zone 2 commenced. Careful study of the 2007 Local Plan confirms that these extra houses were not in place when the document was published in 2007.

As it turned out, apart from the evidence of building materials and containers shown in the photo below development of Zone 2 didn't take place. Zones 2 and 3 are shown on the Local Plan as 4 H with the dividing line running north-east to south-west which meant that Zone 3, under different ownership, can not progress until Zone 2 has created a through access.

Located between numbers 14, 18 and 20 (unnumbered) is the footpath that was provided to a dog-walking area (see photo below) that is shown as beige on the map. A SUDS area probably exists in the dog-walking area. Photographs exist but are not clear as to the layout of the area.

Looking into Zone 2. Plans were submitted for this site.

The 'hammerhead' at the end of Mount Eagle Court.

Footpath to dog-walking area and Zone 2

View looking out from the, largely, overgrown dog-walking area.

The dog-walking area is at the bottom of the image looking in the direction of the last image.

Numbers 11a and 11b were squeezed in here as an extra to the original plans.

Added by the developer as an after-thought along with its neighbour.

Notice the common entrance - often done to reduce the number of accesses from a main road. 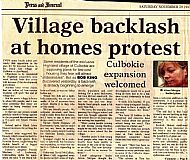 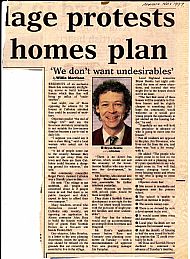 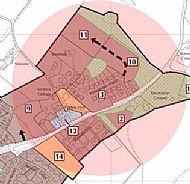