The map surfaced when Captain Elliot's office was being cleared after he had moved from St. Martins farm, Cullicuden and was made available to the History Group by Sarah-Jane and John MacCallum. The initial questions raised were "when was it created and by whom" as there was no identification. We think it is safe to assume the author to be Captain Elliot who had moved into a new-build in the village adjacent to the telephone exchange that he called "St. Martins".

As to when it was created gave rise to some detective work based on what was and was not shown on the map. The map had been drawn onto the back of an advertising poster for Royal Mail going metric from 29th September 1975 (The Royal Mail changes to metric measures for postal tariffs.) so that was a starting point. At the other end of the date spectrum was that there was a change of headteacher at the school in 1982.

A conversation with Angus Bethune has now established that the author of the map was his mother, Mary, who ran the post office when it was located at the family house, Glentyan. The fact that it had been drawn on an official Post Office poster should have made us more suspicious regarding Captain Elliot's involvement. Mary produced it for the benefit of a postman who was based in Conon Bridge and whose round included Culbokie. Quite how it came into the possession of Captain Elliot is not known and gives rise to a further puzzle as Captain Elliot is shown as being in residence in his new-build property "St Martins" in the village and also out at the farm, St Martins, at the north-eastern boundary of the village.

An earlier last date for the map can be further narrowed down to 1979 based on the recording of the “New Road” i.e. the A9, which connected with the opening of the Cromarty Bridge in 1979. Given the timescale of road construction we can assume a date of around 1977/8 would be reasonable. Further detection identified a house built in 1976 that doesn't appear on the map. Then with significant knowledge, detailed below, learnt of the development of the Schoolcroft site we can now be confident that the date of the map can be narrowed down to 1976/77. 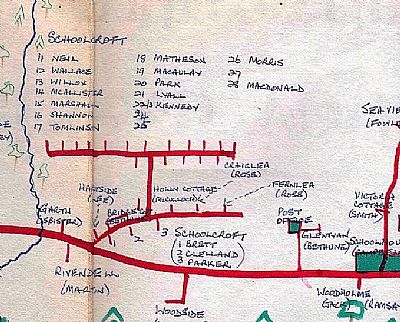 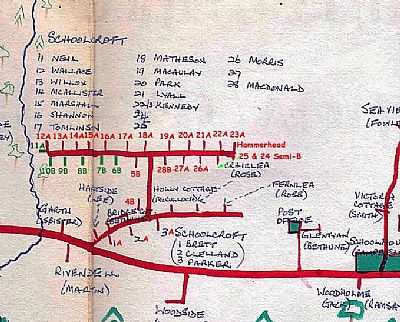 Images can be enlarged from the Gallery below.

The development of Schoolcroft commenced in 1974 after Tarradale Construction had purchased the croft ground from Jimmy Macdonald the original owner of Bridge Cottage croft opposite what were to become numbers 1,2 and 3 Schoolcroft. The croft had, for a time, been let to Simon the shepherd (Macdonald) from Munlochy.

Planning permission had been obtained for 28 properties of 3 designs; predominately the "A" frame 1 1/2 storey design (numbers 1,2,3,11 - 23) along with bungalows (4 -10, 24 - 28). Development continued apace with the author of the map being able to identify a significant number of purchasers, two of whom are still in ownership, 12 and 26, with one other in the ownership of the family of the original purchasers, number 1. Tarradale Construction went into provisional liquidation by October 1976. At this stage John Mackay Plant (JPM), Muir of Ord, took over the completion of the site inheriting problems relating to planning issues and site interpretation which resulted in numbers 26 and 27 being built to the original "A" frame design and with 27 being significantly re-sited to avoid intrusion over Holly Cottage, Craiglea and Fernlea. JMP introduced their own design of bungalow for the plots 6 to 10 that were not in evidence when the map was drawn, giving credence to the date of the map being 1976/77. An advertisemant placed in the Ross-shire Journal, 19th September, 1980, appears below in the Gallery. It was found in 2015 under a carpet. Several of the properties laid empty for several years and one of the batch 6 to 10 was sold by JMP in 1982.

The Development featured in a controversial decision by the Planning Department who had considered opening up the hammerhead between numbers 23 and 24/25 to create an access to the site that was to become Fowler's Croft for 12 self-build houses. The Ferintosh Community Council gained sufficient support to cancel out any such considerations, resulting in the traffic calming measures being installed between the Findon Hall and Victoria Cottage. The hammerhead gap, originally identified as a suitable space for a play area, is still in private ownership.

So ended the development of Culbokie's first significant housing expansion.

Our thanks are extended to Alastair Rose for his help in compiling this history.

Memories of the development can be found here. 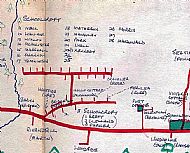 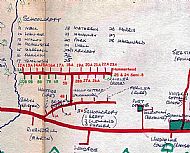 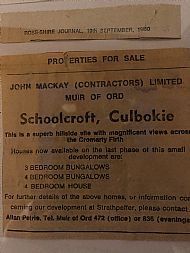