The full report from which this summary was taken can be downloaded from here.

The history of the The Noticeboard, the newsletter of the Ferintosh Community Council.

In 1974 the three local communities of Mulbuie, Easter Kinkell and Culbokie were approached and invited to form a steering committee to prepare a constitution for a Community Council and I, Roger Piercy, was chosen to be one of the representatives for Easter Kinkell. The name “Ferintosh” was chosen as being significantly historical and neatly embracing the 3 communities. At one stage there was the possibility that Conon Bridge was to be included but eventually there was sufficient interest there to form a council. Nominations were sought for the first election and as all but one of the steering committee put themselves forward and there were no other nominations the first and all subsequent councils have been formed without an election. However, this changed in 2019 when there were more nominations than places. The first Chairman of the Ferintosh Community Council (FCC) was Jack Sinclair, Culbokie.

The feeling had existed within the FCC for sometime that there was a need of a method of communicating regularly with the community and it was decided to create a newsletter. As I was developing my Desktop Publishing skills in my role as PT Computing Studies at Dingwall Academy it fell to me to be editor and publisher using the primary school photocopier made available by the head teacher Stuart Greaves.

Unfortunately there is very little physical and digital information available of the early days of the The Noticeboard which was the name selected for the newsletter.

The first evidence we have is issue 13 which is dated February 1991 and based on the assumption that we have invariably worked on a 2 month cycle we can extrapolate back to Issue 1 being sometime in 1989. If anyone has original early Noticeboards then we would like to see them.

Publication continued every 2 months until issue 90, April 2002 when I dropped out of FCC affairs.

We now move on to the AGM of FCC in April 2007 where, having returned to FCC duties and the role of vice chairman via the formation of the Ferintosh Environment Group in February 2004, Carol Elliot volunteered her services as editor so as to re-introduce the The Noticeboard. It took me a while to negotiate arrangements with her and her first issue, issue 1, was June 2008 with me continuing as publisher and continued through to Issue 53, June 2018 when she handed over Editorial duties to Eilidh Richmond.

The next major change in the life of the The Noticeboard was with issue 60 in November 2019 when I handed over the duties of printing to Becky Richmond. 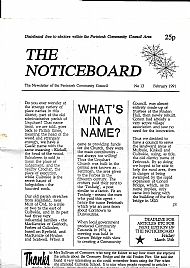 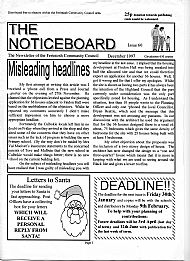 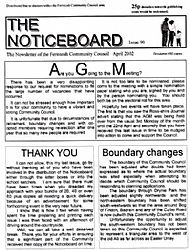 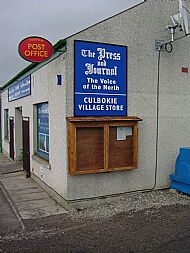 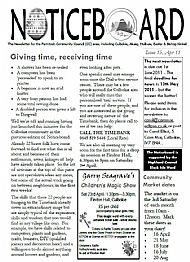