Download the full article from which this summary was taken.

Photographs of the re-alignment of the B9169 leaving the village heading east, October 1989.

Images of the route of the old B9169 at Woodholme Croft now posted at the start of the Gallery. These came to light during the preparations for a house development.

Between 13,000 and 10,000 years ago the ice sheets finally retreated from this area and by 7000 years ago the grasses, shrubs and small trees such as birch that first covered the land were themselves covered by extensive forest populated with elk, deer, bear and wolves. Our local human history began with the Middle Stone Age people who as nomadic hunter/gatherers established migration routes which can be traced today in the layout of modern roads. One such track led down the line of Dingwall high street to the ferry crossing to Alcaig. An influx of new arrivals occurred about 3500BC from Europe and these became the farmers creating permanent settlements leading to connecting routes. The main overland routes to the south from the Black Isle were the drovers’ routes. Muir of Ord’s Market Stance was the meeting point for the droves from the Black Isle, Strathconon and Easter Ross before their journey south to Crieff and Falkirk.

This article will uncover some of the historical paper evidence of roads and the changes to the roads that have taken place in recent times. The local ferries will be covered as will the effect of the railway system from Inverness to Muir of Ord, Dingwall and Invergordon with reference to the Fortrose branch and "our own" attempt to join the railway system as told in the chapter "The railway that nearly came to Culbokie". The Scudell ferry across the River Conon is referred to in the main text and a photograph of its location has been added to the Gallery at the foot of this page.

Illustrations of the various means of transport associated with Culbokie have been added to the Gallery at the foot of this page.

The photos of lorries and buses illustrate what the village would have seen on a daily basis prior to the building of the A9, in the case of the lorries, and the increase in car ownership, in the case of the buses. H D Fraser had their depot at Balblair and Highland Haulage had their depot at Rootfield at the Leaniag crossroads. The only viable route south from all parts of the Black Isle was the B9169 to Muir of Ord and then hence via Beauly to Inverness. There is still one haulage company to be represented and that is Duncan McCallum, Braefindon, but as yet there are no photographs available.

Click on one of the images to open a slide show and progress left or right. It is quite likely that this gallery will be updated quite regularly as more historic photographs relating to Culbokie become available.

A film showing the construction of the Cromarty Bridge can be viewed here.

The story of the A9 crossing the three firths can be downloaded here.

View from the entrance to Woodholme Croft

Excavator on the original surface.

The last remnant of the old road surface. 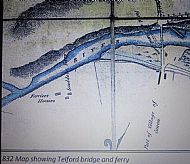 "Diligence" coach of the type running between Inverness, Beauly, Dingwall and Tain, accessed by the ferry across to Foulis 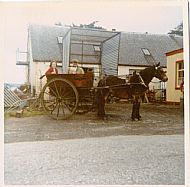 Horse and trap at the smiddy in Conon Bridge

Another view of the smiddy 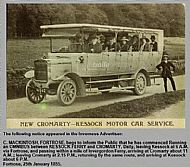 Site of the original garage for Ross's buses. Looking west along the B9163 at the road end to Inch.

Three photos of Highland Haulage lorries. There was a very busy depot at the Leanaig cross-roads